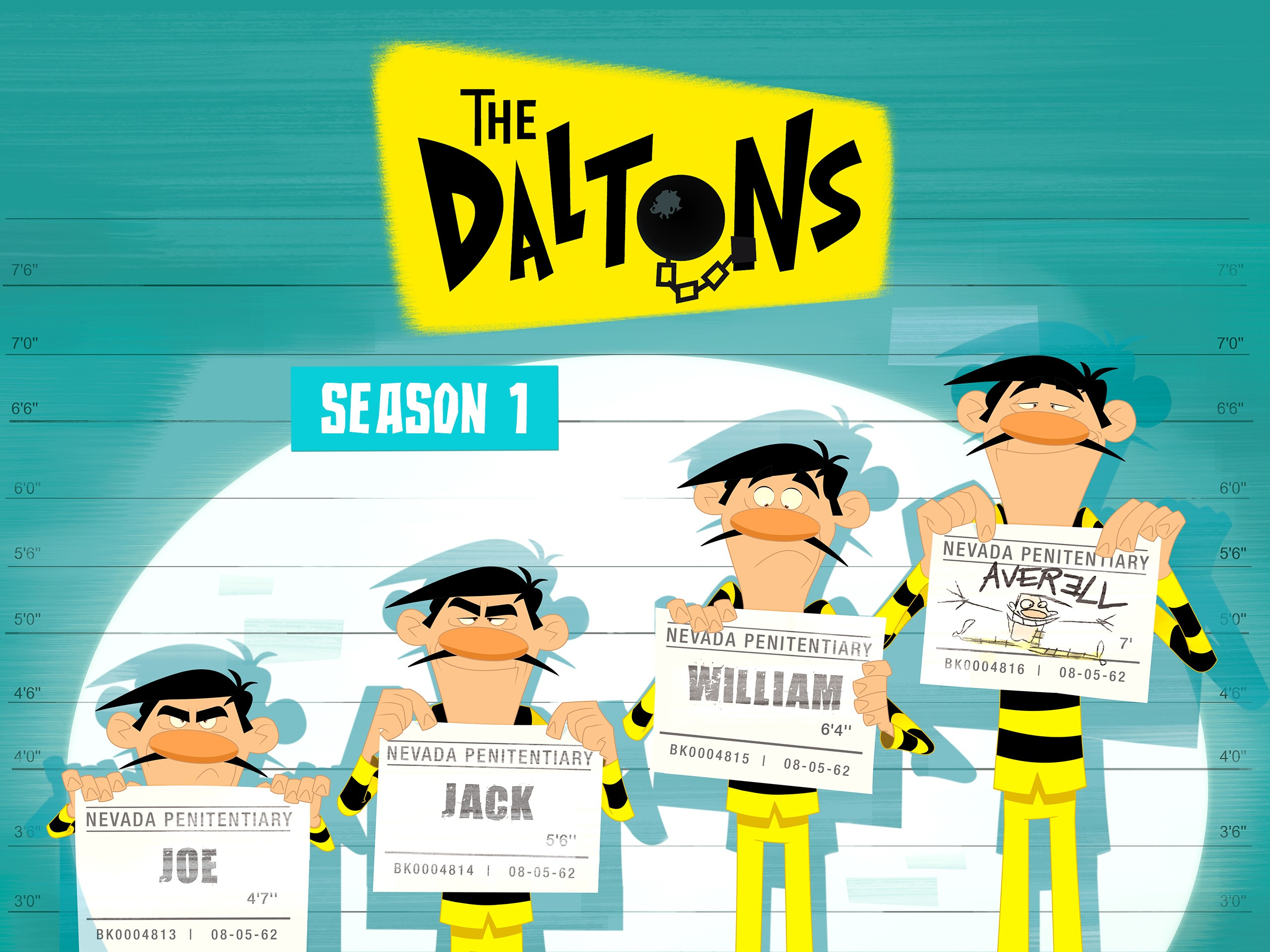 Follows the adventures of the Dalton brothers as they try to escape from prison. They use all kinds of tricks and a series of mad characters while on their way to achieve freedom. 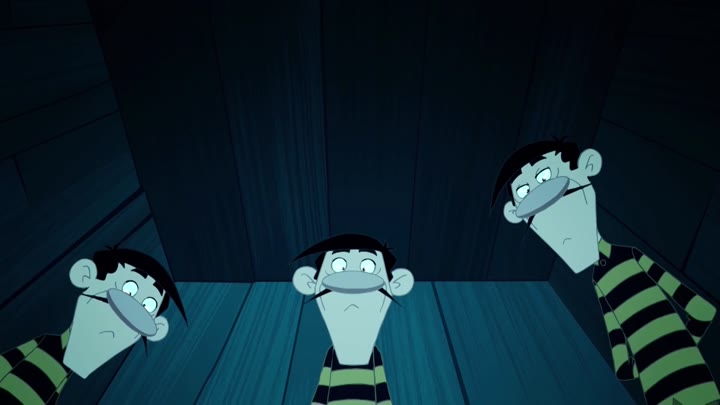 The Daltons seize a chance to escape while the shower system is being modernised. They intend to slip down the pipes to escape. But they need soap to squeeze in… Add water to soap? You get bubbles…
Watch / Download 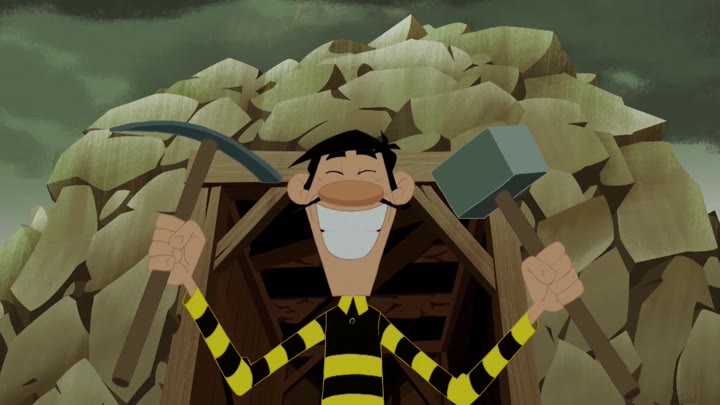 Crazy Wolf turns up to warn Peabody, the Prison Director, about an approaching tornado. He requests shelter for his tribe – apart from Fabulous Falcon who plans to stay outside and invent a dance that can stop the tornado. Of course the best shelter would be the cellar… but there isn’t one anymore: Peabody had it filled in! They have to dig another one fast! Funny how willing the Daltons are to start digging…
Watch / Download 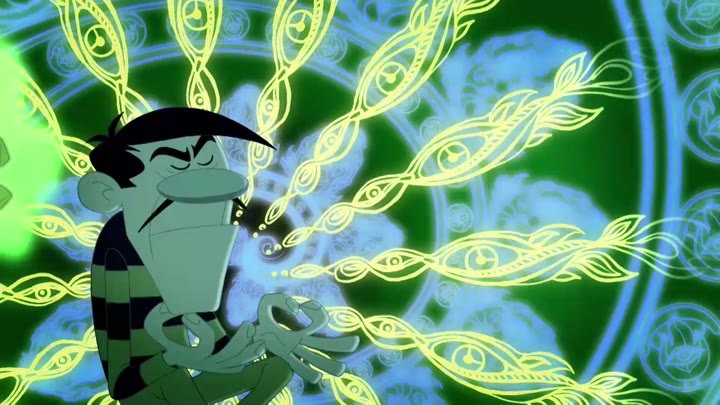 Prisoners are encouraged to let their minds go, during a yoga class… Averell’s spirit leaves his body and travels through walls, just ike a ghost! Although Averell’s spirit is as stupid as usual, his ethereal mind actually can help his fellow Daltons escape… but when they’re in the desert, they have a problem: how can they get Averell inside his body – back there?
Watch / Download 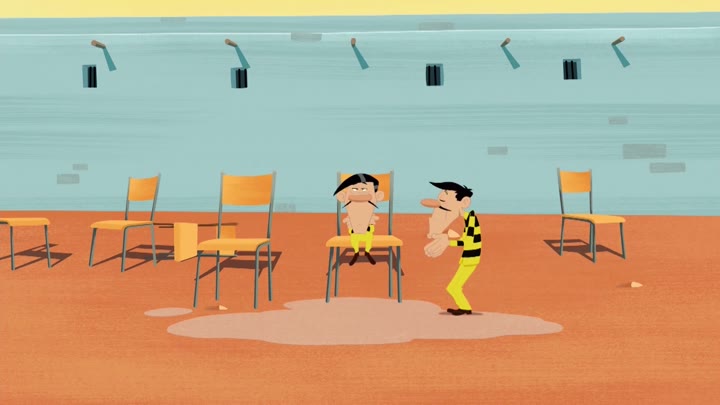 After Fabulous Falcon’s seminar on the ritual rain dance, Averell turns out to have a real gift for changing the climate. The Daltons decide to hide inside the spectacular downpours he provokes to escape. But the climate change speads and the Broken Wings tribe is not happy with the situation…
Watch / Download 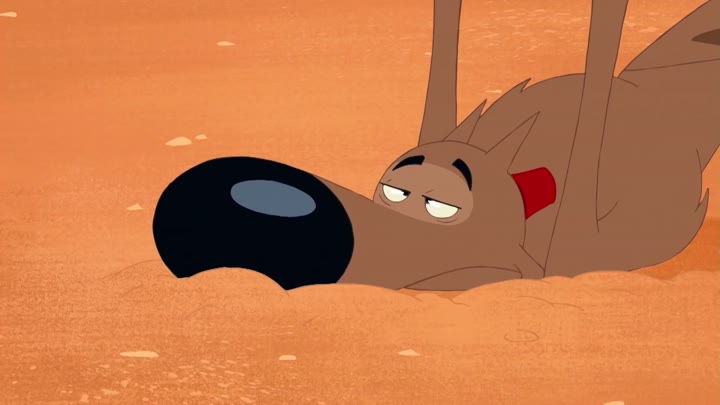 The penitentiary director is fed up with the way Rintindumb pees in the prison yard. He has the lamp-post the dog uses removed. From now on, inmates are going to walk Rintindumb. Another fine opportunity for the Dalton brothers, who promptly propose their services as dog-walkers. But they have to pass tests first, and they’re not easy…
Watch / Download Miss Betty is redecorating her apartment. Averell has very good taste, and she asks him for a few tips. Miss Betty has a double for the prison keys, so Joe decides he’ll replace Averell, by climbing on top of Jack’s shoulders. He slips himself into her apartment to steal the keys. But Joe’s not exactly gifted when it comes to decorating…he has to appeal to his numbskull brother’s “talents” to succeed in his plan.
Watch / Download

The Daltons are about to break out at last when the siren goes off! But they didn’t set it off! Stinky Bill did… and not only that – he takes Dalton hostage! That’s the start of some tricky negotiating…
Watch / Download Miss Betty affirms that reading is thr best way to freedom, so Joe devours every book he can lay hands on in the prison library. However many books the Daltons read… nothing happens. They’re still locked up. Then Joe stumbles on the “ The Count of Monte-Cristo ” – it’s a revelation! They just have to PRETEND to die, like Edmond Dantes! But acting dead is harder than it seems…
Watch / Download The Daltons escape through the elaborate tunnels they’ve been busy digging ever since the penitentiary first opened. Pursued by Rintindumb and the guards, the escape turns to chaos, especially after Averell, Jack and William eat super glow mushrooms that make them shine like beacons in the dark. Everyone is convinced they’re faced with GHOSTS.
Watch / Download A fakir turns up in the penitentiary. When they discover that this “ snake-charmer ” can make a rope rise into the air simply by playing his flute, Joe declares that the Daltons are going to follow the Fakir’s teachings. But they have to carry out other very painful exercises before getting to the flute trick. Oddly enough, Averell proves to be the most gifted student…
Watch / Download A new inmate called “Ace of Escape” turns up in the penitentiary. The Daltons reputation is going to take a beating. Joe decides to rise to the occasion, and challenges the new guy with a bet that the Daltons will be free by dusk…
Watch / Download The Daltons build a chimney and fireplace for Santa Claus… with the hidden ambition of escaping through the conduit! Unfortunately, a few inmates hold a grudge against Santa and they’re eager to get even with him for once and all…
Watch / Download Peabody’s nephew is a droopy kid. His mom – the director’s sister – decides to pack the boy off to the penitentiary during the vacation, to inject him with some stamina. This tall gangly skinny kid seems bored by everything… like most teenagers. But then he meets the Daltons who are “too cool to be true”! Joe convinced the kid to steal the penitentiary keys off his uncle. But running wild with a teenage boy is full of surprises…
Watch / Download Thomas Edison is sent to prison after his disastrous experiments about electricity, which have set off catastrophic accidents. He continues his research in the penitentiary, and sets off a fire. Peabody is furious but Miss Betty convinces him that a new discovery by Edison would make their establishment famous. Joe and his brothers volunteer as lab assistants.
Watch / Download Doctor Jeff Kill wants to try out a new anti-criminal vaccine on the inmates. It’s supposed to heal the obscure side to the criminal mind. Joe manages to avoid this forced vaccination after Averell accidentally ingests a massive dose of the criminal virus and changes into a kind of “ were-wolf” who terrorises guards and prisoners alike. Joe wants to seize this opportunity to escape, but – whether sweet-natured or vicious – Averell still a giant handicap to his brother’s plans –…
Watch / Download
Related Articles
How to Watch/Download?
Tags
The Daltons 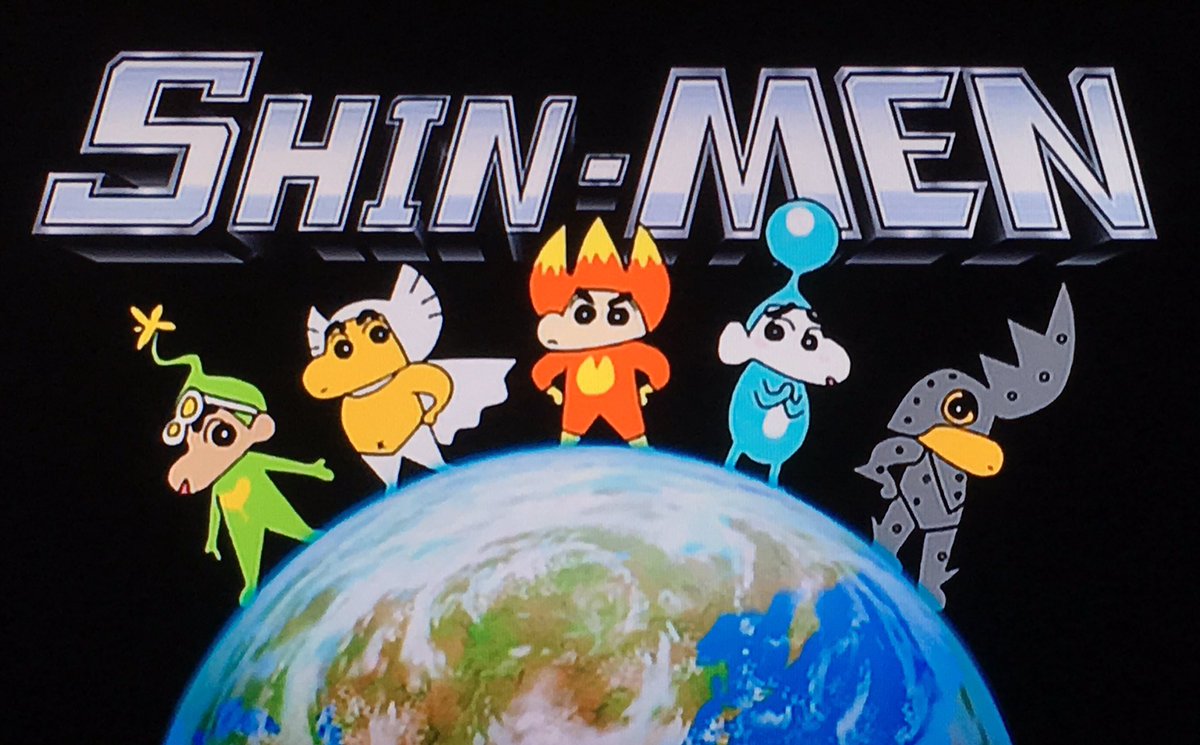 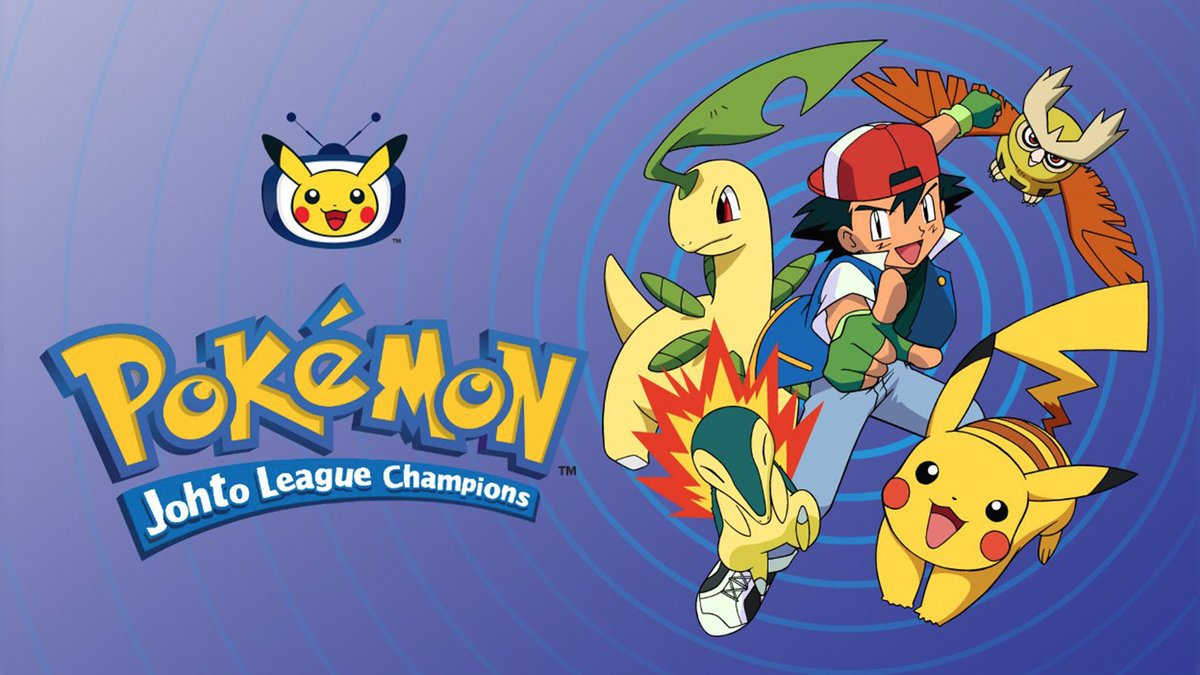 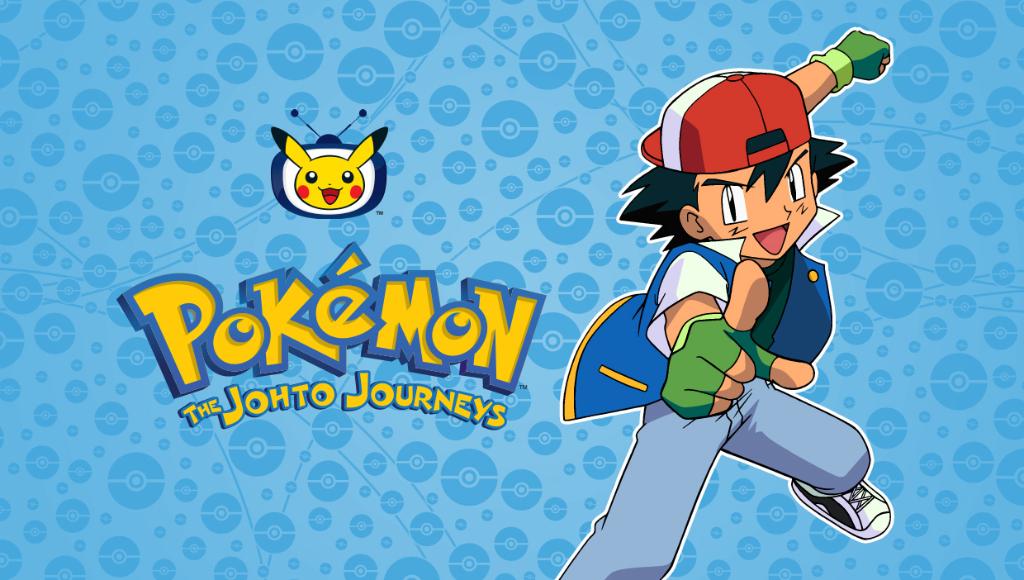